Whether tracing along the Passaic River, or connecting neighborhood streets through wooded tracts, there are multiple trails and pathways for residents and visitors of all ages to enjoy. Points of interest include multiple Berkeley Heights parks, the historic Littel-Lord Farmstead and nearby Watchung Reservation. New trails are being constructed to connect existing sections in Passaic River Park, and to provide greater access to the area. The township had a total area of 6.26 square miles, including 6.22 square miles of land and 0.04 square miles of water. Certain portions of Berkeley Heights are located in various flood zones. The township is located partially on the crest of the Second Watchung Mountain and in the Passaic River Valley; the Passaic River forms the township’s northern border. The township is also located partially in the Raritan Valley region, in which the Green Brook forms the township’s eastern border near the Watchung Reservation. Berkeley Heights is located in northwestern Union County.

The map below shows the existing and planned or conceptual future trails in Berkeley Heights, as well as notable landmarks such as our Downtown, parks, Municipal Complex, library and parking. Thanks to a grant from AARP, the Township was able to construct 4 new wooden kiosks at Snyder Park, Lower Columbia, the YMCA and Passaic River Park, which now house beautiful new large-print versions of these maps, as well as smaller, portable versions. The AARP grant is helping us promote walking and pedestrian activity not only among our residents ages 55 and over, but among residents of all ages.

Click here for a larger PDF version of the above trails map.

The Trails Score Card is our primary medium to collect feedback on Township walkability from resident walkers. The intent us to identify trails that need improvements throughout the year, and to identify user preferences. All input is welcomed. The score cards are always available electronically and on paper at each kiosk. Residents are encouraged to pick one up, score the trails accordingly and drop off the completed scorecard in the tax payments mailbox outside of Town Hall, or to email them to EC@bhtwp.com. We are working on creating a digital scorecard that residents can fill out and submit online. The information will be used to help us guide our future trail/path improvements.

Click here for a printable version of the score card. 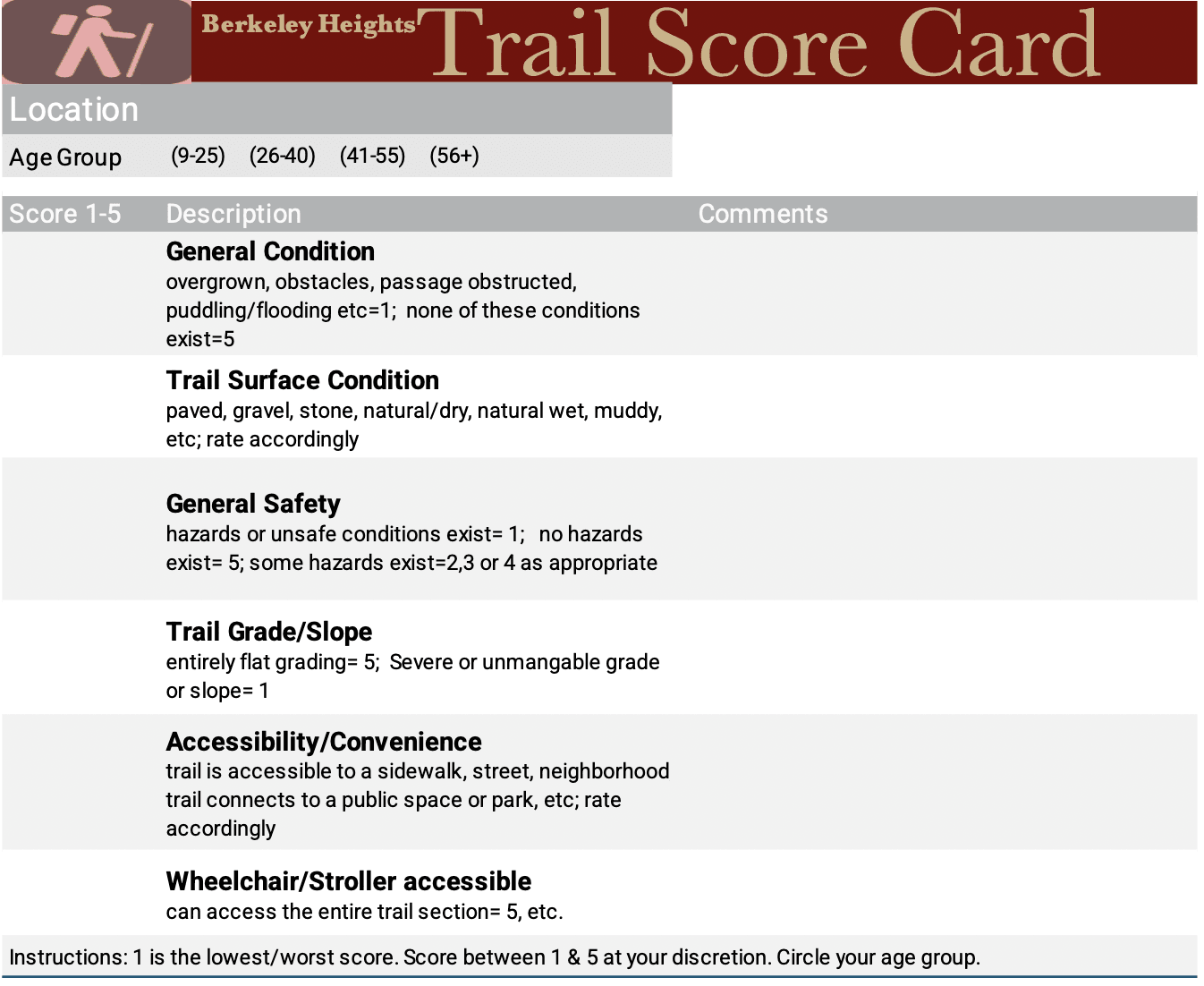